aka the “i got a shiny new machine” post

Back in May I did some overtime which gave me the ideal impetus to buy the sewing gadget I’d been trying to justify. Given that the price is the same regardless of where you buy it in Australia, I traipsed into my local sewing machine shop and bought it there. But I also bought some binders from the US on the same weekend – which managed to arrive before the machine did from the Janome warehouse in mainland Australia. Go figure.

The machine went away to Orford with me  for Creative Camp and that was my first real experimenting. I had four garments waiting to be finished that I’d packed, some hemming and some topstitching on knit garments. I’d previously used Mum’s overlocker which converts to coverstitch and that was what really sold me on the idea.

What I’ve learnt so far:

Some hemming with the matching colour up top and white underneath. Doesn’t show through. Winding off some of the gutermann thread onto a bobbin saves buying two reels.

Topstitching this top was so easy. I’d previously tried on my sewing machine and got horrid results with stretching and sliding all over the place on this cotton viscose knit.

The trio of machines at Creative Camp – the coverstitch is on the left.

look at that topstitching!!

Since then I have made a wee baby wrap top for NNTB and last night used the binder to edge a vest my son and I have been working on. I suspect binding the edge of slippery nylon, sleeping bag innards and merino knit lining is pushing it. The stitch length shortened as the machine didn’t feed the layered fabric through quickly enough but I was leery of changing the stitch length too much as it was working.I just concentrated on lining everything up straight and keeping an even speed.

Ruby cat loves this vest. What cat wouldn’t? A garment made out of  a sleeping bag? I’d put the vest on the table, turned my back and she’d claimed it. As I write now she is sitting on it over on the couch. Maybe I should make a cat blanket next?

After waking up early on Sunday morning, Day 5 of Creative Camp (May 27) saw the creation of a VERY loud orange pleated skirt. Which made me happy.

I used Burda 7529, a pleated skirt pattern. Initially I thought I wouldn’t have enough fabric as the corduroy was only 108cm wide. Then I realised there was a box pleat on each side seam, and I didn’t think I needed that adding to my silhouette! Deciding to remove that pleat was a good move as the cord has a reasonable amount of body.

I also sewed the bright blue lining into the ruffle skirt (yet to be photographed) and took it home to handsew the hems.

All in all, a fabulous five days of decompression prior to starting a new job. Our next one is planned for October and it’s prompted some thoughts about other, more communal sewing events too.

So much has been happening, that I’m going to try and catch up on some of it today here and spread the rest of the posts through the week. Thank goodness for an extra weekend day. We will be celebrating the official birthday later today. With cake. And cups of tea. And all the grandparents, one of whom emigrated from the UK. Reason enough for cake I think!

So, this weekend has had three sewing related projects so far. None of which were on my list on Friday night.

Niece/Nephew-to-be (hereafter to be known as NNTB until the little thing gets a name) now has a tiny onesie in it’s box in the hallway. It joins the last couple of rugs from CreativeCamp which now have their quilting stitiching. Thanks to Jenny for deciding on what sort of designs to do. And who took the remnants of B&W dalmatian spots off to make a bag.

I used a free tutorial and pattern from Nefertari  for a wrap around style onesie. To be honest, it was the opportunity to get more confident with my coverstitch machine that really attracted me. The practicality of a wrap around rather than pullover for a small baby seemed nice too.The instructions are clear and well thought out.

I learnt that you need to be aware of your thread quality with the coverstitch. On Saturday night I was having all sorts of trouble with thread breaking and looking generally horrid. I had planned to test out my bindings and fabric layers so was prepared to do some samples, but not so much for this. I switched back out to better thread and changed the colour of the binding I would use to match the thread I had and all was well. After Melissa of Fehrtrade’s summary of what she learnt I’d mistakenly pysched myself up for having to change the fabric I was using! I am sure when I sew something more complicated than cotton jersey I will need to keep her post in mind.

An emergency make yesterday afternoon was a single slipper for the stressed (exams) and tired university student. My son could find one slipper but not another. So, from the remains of a conference bag for the sole, and an old polar fleece jacket for the inner sole and upper, Zac now has two warm feet.

Still on the dining table is a vest for Zac too. Made out of a too-light-for-Tasmania-really sleeping bag and some merino knit. We harvested the zip off the polar fleece jacket which gave us the slipper so that can move forward without going shopping. I am going to try binding the edges to sandwich the layers together. 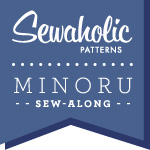